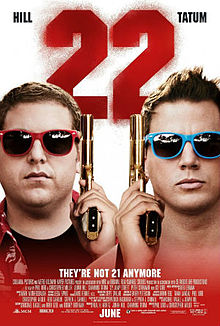 22 Jump Street is the sequel to the 2012 movie 21 Jump Street. Channing Tatum and Jonah Hill resprise their roles as Jenko and Schmidt respectivley. Ice Cube  returns as Captain Dickson.  The movie was released on June 13th, 2014 and opened at #1 in the box office for that weekend.

Despite the movie having an identical plot to its predecessor, 22 Jump Street shifts away from being a deconstruction of the 21 Jump Street tv show and becomes more of a self-aware comedy mocking action movie sequels.

Following their success in the 21 Jump Street program, Morton Schmidt (Jonah Hill) and Jenko (Channing Tatum) are back on the streets chasing drug dealers. They thought by going to actual college that they would be hunting down real criminals once again. However, unannounced to them, they were assigned to online university, only looking for key words and phrases during online lectures that might give off any indication of any illegal crime happening around the city. Eventually, they come across the meeting time and location of another powerful gang in the docks. However, after failing in the pursuit of a group of dealers led by Ghost (Peter Stormare), Deputy Chief Hardy (Nick Offerman) puts the duo back on the program to work for Captain Dickson (Ice Cube) - now located across the street at 22 Jump Street. Their assignment is to go undercover as college students and locate the supplier of a drug known as "WHYPHY" (WiFi), which stands for "Work hard? Yes. Play Hard? Yes.”  It also killed a student photographed buying it on campus.

At college, Jeff quickly makes friends with a pair of jocks named Zook (Wyatt Russell) and Rooster (Jimmy Tatro), two football player fraternity members that become the prime suspects of the investigation. Jenko starts attending parties with the jocks who do not take as kindly to Schmidt. Meanwhile, Schmidt gets the attention of an art student, Maya (Amber Stevens), by feigning an interest in slam poetry. The two sleep together, to the disapproval of Maya's roommate Mercedes (Jillian Bell), and it is revealed that Maya is the daughter of the vehemently disapproving Captain Dickson. Despite sleeping together, Maya tells Schmidt not to take it seriously, and he starts to feel left out as Jenko bonds more and more with Zook who encourages him to join the football team.

Jenko and Schmidt visit Mr. Walters (Rob Riggle) and Eric (Dave Franco) in jail for advice on how to look for the WHYPHY supplier. Walters notices a unique tattoo on the arm of the dealer in the photograph and insists that if they find the tattoo, they will have found their man. Whilst hanging out with Zook and Rooster, Jenko notices that Rooster does not have the tattoo but sees it on Zook's arm. Schmidt and Jenko are invited to join the fraternity led by the jocks but Schmidt refuses, furthering the tension between the two. At a counseling session, they realize that perhaps Zook was buying the drugs rather than selling them, and soon after find Ghost and his men on campus. A chase ensues and Ghost once again evades the pair. Jenko reveals to Schmidt that he's been offered a football scholarship with Zook and is unsure whether or not he wants to continue to be a police officer. Schmidt decides for him by telling officers on the scene that Jenko had nothing to do with the melee caused by the chase. Immediately afterwards, Schmidt moves out of the dorm and Maya finds out who he really is and leaves him. Dr. Murphy (Marc Evan Jackson), a psychology professor who they visit early in the film, is deemed the supplier when traces of WHYPHY are found in his office. He is subsequently arrested and the case closed.

Schmidt, back on park patrol, realizes Ghost pays tuition for one of the students at the university after looking in the case file. Jenko spots WHYPHY circulating on campus again and determines the real supplier, still at large, will go down to Puerto Mexico on Spring Break to spread the drug to other schools. Jenko asks Schmidt for help so that the two can have one final mission together, and the pair head to the beach where Ghost is likely to be dealing WHYPHY. Inside a bar, they find Mercedes, revealed to be Ghost's daughter, as the supplier giving instructions to other dealers. They also find out their old roommates, nicknamed the Twins, are also in on the deal. The pair, backed up by Dickson, ambush the meeting and give chase as they flee. Mercedes is able to handcuff Dickson and take him hostage, pursued by Schmidt. Meanwhile, Jenko goes after Ghost. After a fist fight with Mercedes, Schmidt is held at gunpoint by her but Maya (who happens to be on break at the same location) sneaks up and knocks her out. Schmidt goes to help Jenko who is now on the roof of a high-rise hotel in pursuit of Ghost, who shoots Jenko in the shoulder once again. Ghost attempts to escape in a helicopter and Jenko jumps across to it but struggles to hold on with his injured arm. Schmidt makes the same jump and the two fall into the sea, but not before Jenko is able to throw a grenade into the helicopter, killing Ghost. Back on land, Jenko tells Schmidt that he still wants to be a police officer as he believes their differences help their partnership, and the two reconcile in front of a cheering crowd. Dickson approaches them claiming to have a new mission undercover at a med school.

During the credits, a series of mock sequels and vignettes are shown depicting the two going undercover in various places, such as culinary school, flight school, seminary (in which Schmidt is played by Seth Rogen due to a "contract dispute"), and space camp (2121 Jump Street). Richard Grieco "returns" as Booker from the original series in Jump Street Generations, and Ghost supposedly survives the explosion, returning in 34 Jump Street: Return Of The Ghost. A franchise is also born from the events of the film, including an animated series, video games, and toys.

Community content is available under CC-BY-SA unless otherwise noted.
Advertisement